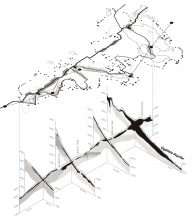 Ephemeral Crossroad acknowledges the Ogallala as a threatened National natural resource and the paramount importance to the landscape and the culture that relies on it.  Since the region is more than 90 percent privately owned with diverse state and local ownership of the aquifer, a singular engineered or preservation based regional master plan to “save” the aquifer and sustain the region is fraught with problems.  Ephemeral Crossroads moves beyond a singular prescriptive master plan and proposes a juncture for design initially to index and appreciate the typically invisible aquifer to local communities, the region, nation and world.  It further proposes to foster a stewardship of the region, it’s energy producing capabilities and the aquifer through a built public network of multi-functional regional corridors to provide an infrastructural framework to crystallize resources and community and provide the impetus for functional resiliency in the landscape.

The question is not if the Ogallala Aquifer will begin to give out, it is a question of when. Ephemeral Crossroads is about taking immediate steps toward an acknowledgment of a critical yet generically known region, and a further acknowledgment of the invisible underlying aquifer that is the major resource for the region’s economy and sensitive ecologies.  It is about using the medium of landscape and design to seed a local appreciation and national stewardship for the aquifer over time.  Ephemeral Crossroad integrates micro-design interventions along a north-south highway and a network of connective trails to provide resilient solutions across an extremely broad territory. The objective to foster a stewardship of the aquifer at a small scale along critically located corridors with the intention to broaden the successful strategies across the region over next 100 years.   It is the backbone for new futures linked to the greater national urban context, demonstrating a heightened relationship between critical national water resources and sustainability of the built environment. 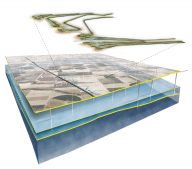